An arc flash is the light and heat produced during an arc fault, which is a type of electrical explosion that results from a short circuit or electrical failure. An arc flash occurs when a flashover of electric current leaves its intended path and travels through the air or to the ground. If a person is near the arc flash, serious injury or even death can occur. To help protect against injuries, the National Fire Protection Association (NFPA) recommends that Flash Hazard Analysis (an Arc Flash Study) is done before a person approaches any exposed electrical conductor or circuit that has power running through it.

What is an Arc Flash Study?

An Arc Flash Study calculates the amount of energy that would need to be contained at various points in an electrical system if a failure occurred. This allows system parts to be marked with warning labels so workers know the level of personal protective equipment (PPE) needed for that area. The study creates documentation of the overall electrical system and its branches. The report can also detail what can be done to reduce voltage in certain parts of the system during a fault, such as adding fast-acting circuit breakers or fuses. However, those changes should be balanced with the inrush current occurring during equipment start up.

Why is an Arc Flash Study necessary?

Arc Flash Studies are required by the Occupational Safety and Health Administration (OSHA) and NFPA as part of Electrical Hazard Assessments. Having a current Arc Flash Study is also part of the electrical codes and standards adopted by local authorities. Code recommends that Arc Flash Studies are completed every five years or whenever changes are made to electrical systems. However, these requirements and recommendations are more likely to be self-enforced than checked by outside authorities.

More than code compliance, the biggest driver for completing and maintaining an Arc Flash Study is safety. Keeping electrical system areas properly marked is critical to help workers select appropriate levels of PPE for the energy contained in different parts of the system. It also helps limit liability and mitigate risk to the company and its workers.

Who is most likely to use an Arc Flash Study?

While most professional buildings are not exempt from the need for a study, some facilities have higher hazard levels and therefore greater need for the analysis. Industrial, manufacturing, utility and municipal plants typically have higher capacity, and therefore more energy, in their electrical systems. Plants also have greater need to keep the electrical system in-service while maintenance work is being performed on the electrical equipment compared to a typical office building. These factors give an Arc Flash Study higher importance.

Arc Flash Studies also identify high energy areas that might not be as obvious to a worker. For example, the closer a worker is to the electric service area, the person is typically exposed to more electrical energy. However, that is not always the case when various system branches and pumps are involved. Pumps can often act as a generator to maintain or enhance the electrical energy in the system.

Looking at an Arc Flash Study in action. 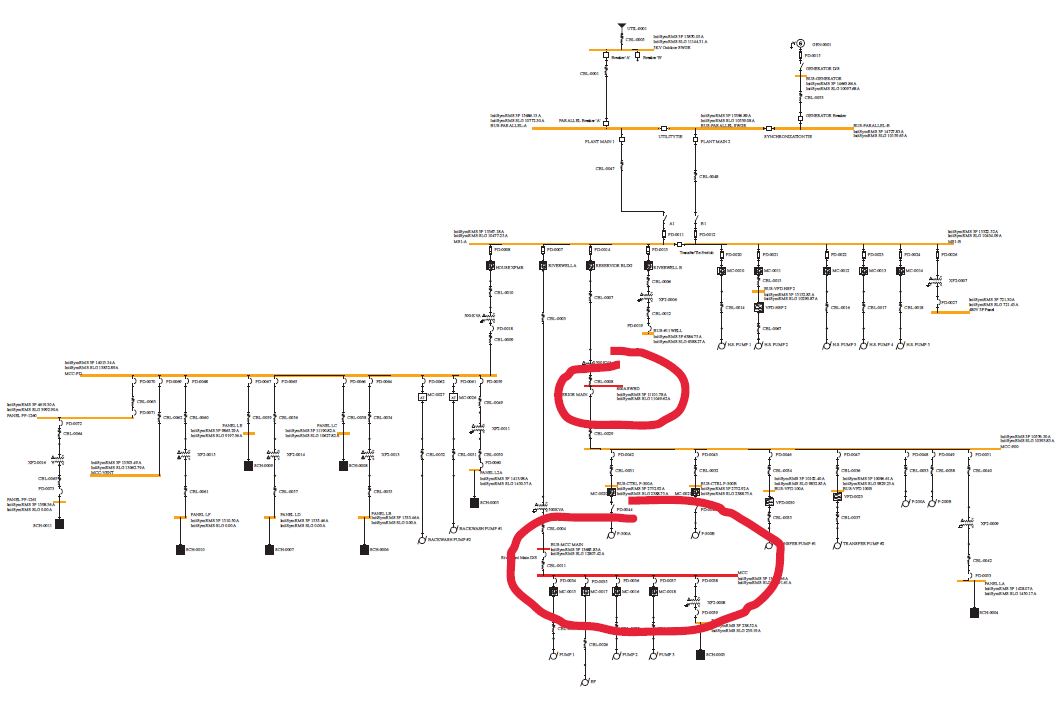 In this system diagram, the Arc Flash Study identified high energy levels at the service area, pumps and in the middle of the system where multiple branches of pumps, motors and energy from the source met. Thanks to the study, the areas were identified and properly marked the electrical equipment to alert workers of the level of potential hazards. This is of particular value because the facility provides essential services so it is unlikely power would be shut down while some maintenance of the electrical equipment is being conducted.

Next steps to take.

While equipment manufactures sometimes offer Arc Flash Study services, a third party who is not connected to the equipment or system can provide a balanced and unbiased approach—particularly related to system needs and upgrades. If your facility has never had an Arc Flash Analysis conducted on the electrical system and doesn’t have the appropriate labels on the equipment, it is critical for the safety of your employees and the electrical equipment that an analysis is performed immediately. If your equipment is labeled, but the dates are more than five years old or modifications have occurred since the date on the arc flash labels, it also is important to have an updated arc flash analysis performed.

It is recommended to contact a licensed, professional engineers like those at Bartlett & West so that you can assure the safety of your staff and the reliability of the critical electrical equipment supporting your business operations.