TOPEKA – By Megan Hart, The Topeka Capital-Journal – Bartlett & West has grown 100 times over in the past 63 years, and its executives think it is positioned to keep growing. 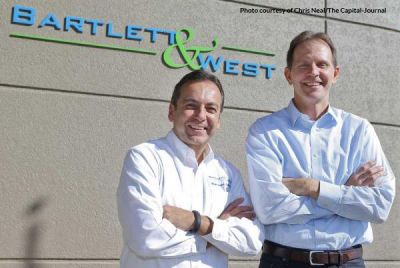 The engineering firm opened in 1951 with two original partners. Much of the early work focused on building the Kansas Turnpike and rural regional water systems sponsored by the U.S. Department of Agriculture, said Keith Warta, president of Bartlett & West. In the 1970s, the firm began moving into different kinds of engineering work, taking on private-sector and land development projects, he said.

"We used to help design these systems around kitchen tables in farmers' houses," he said.

The 1970s also were when Bartlett & West started expanding its geographic scope with the first office in South Dakota for rural water projects, said Joseph Bichler, executive vice president of the company. The company now has offices in Overland Park, Lawrence, Manhattan, Colorado, Georgia, Iowa, Missouri, Montana, Oklahoma, North Dakota, South Dakota and Texas. About 450 people work in its 14 offices, with about 200 of them in Topeka.

Warta said the Topeka headquarters continued to grow alongside the branches and performs some functions for them.

"The Topeka office grew because of what we were doing elsewhere," he said.

Charlie West, one of the original owners, sold the company to an employee stock ownership plan in 1986, Warta said. While workers own the company, they don't vote on day-to-day management, though their input is included in strategic planning, he said.

Warta said he believes having employees own the company gives them an extra incentive to see it succeed.

"We believe a company will grow more, will perpetuate itself, will have more good ideas if people are empowered through ownership," he said. "There's a different attitude, if you're an owner of a company, toward a lot of things."

Technology also changed their work over time, not only by providing new tools for existing services, but also by opening up new ideas like online maps that can meet clients' needs in different ways. One example was when OneCall needed a system to track plastic utility pipes underground so digging crews wouldn't find themselves cutting gas lines they didn't know were below them, Bichler said. They created an interactive map by using global positioning devices to record coordinates when new pipes were laid, he said.

"Technology's there, but you've got to figure out how best to use it," he said.

The company is poised to continue growing in the oil and railroad fields, Bichler said, and also has developed a niche working with tribal governments on water systems and land use plans.

The diversity of fields and locations helped to blunt the impact of the recession, Warta said, particularly since railroads and oil and gas exploration continued to have a healthy growth rate.

"We happened to be involved in markets that were strong throughout the downturn," he said. "We actually grew at a record rate throughout the economic downturn."