By: BOB GILBERT, PE — The roots of surveying trace all the way back to ancient Egypt and the Great Pyramid of Khufu, but in modern day more and more technology is being integrated into the profession - to the benefit of both surveyors and those ultimately using the survey data. 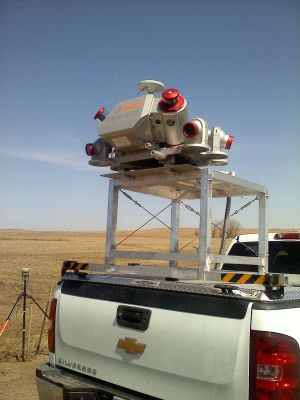 One such example of survey technology is LiDAR (Light Detection And Ranging). With a LiDAR scanner, surveyors have the ability to measure complex areas more quickly, accurately and safely than traditional methods of survey.

LiDAR equipment quickly captures very detailed data by using the reflection time of rapid pulses of laser light to map a surface. LiDAR refers to a remote sensing technology that emits intense, focused beams of light and measures the time it takes for the reflections to be detected by the sensor. This information is used to compute ranges, or distances, to objects.

After collection, the next step is to process the raw point data and deliver the information in the form of contours and surfaces for use in standard design programs.

Ground-based, static LiDAR systems are used for close-range, high-accuracy applications, such as bridge and dam monitoring, facilities inventory, erosion mapping, and manufacturing. Ground-based LiDARs pulse at rates up to 1000 Hz, and can map objects from two meters up to 1000 meters away with accuracies of millimeters to a few centimeters.

Ground-based, mobile scanner offers extremely high measurement rates and provides dense, accurate, and feature-rich data at even high driving speeds. Mobile LiDAR is perfect for applications like mapping roadways and rail corridors, as well as extended urban and vacant areas. This unit provides measurements at a rate of up to 1.1 million per second, and can measure objects from 1.5 meters away with accuracy of a few millimeters.

Aerial LiDAR allows for rapid surveying over large areas with accuracy of down to five centimeters. Uses for aerial imagery include monitoring and managing environmental change, planning for towns, and determining optimal route location and design for major infrastructure projects. This technology can measure 10 to 80 points per square meter, and can capture hundreds of square miles in a single day.

Traditional means of survey only allow for an educated best guess in some instances. Safety concerns can hinder highly accurate measurements of roadways and stockpiles. Transmission lines and as-built indoor facilities are difficult to measure using traditional survey.

LiDAR technology allows surveyors to get highly detailed information about terrain and mass in ways never before possible, and the density of the gathered data set from one trip can save the need for additional survey work if plans are altered or additional information is needed.

"Traditional survey methods still have their place on many public works projects, but in certain instances, such as on high-traffic roadways when the safety of the survey crew is a factor, LiDAR gives us the ability to capture extremely detailed survey-grade information quickly and while mitigating safety risks," said Herb Bailey, a project engineer at the Jefferson City-based engineering and technology firm Bartlett & West.

Bailey added, "For example, since LiDAR works of off surface bounce-back we have the option to scan a roadway at night if we are looking to capture the details of the roadway during a lighter traffic time. This helps keeps the survey crews off the road while getting accurate measurements to take into the design program."

One such example of performing LiDAR work at night to minimize disruption of traffic flow and increase safety was the Missouri Department of Transportation's (MoDOT) mapping and survey of Highway 5 in Lebanon, MO. In November 2012, MoDOT used Bartlett & West to establish horizontal and vertical survey control, survey utility locates, design survey of the project corridor and provide base mapping for this sidewalk project along Highway 5.

With a tight time frame, unknown weather delays, and a high traffic area, along with being in a developed urban area, Bartlett & West decided the design survey would be completed using a Terrestrial LiDAR scanner made by Riegl. The horizontal and vertical control was set with GPS technology utilizing the MoDOT Global Positioning System Reference Station Network. The control points had a minimum of four hours in between occupation times. Utility locates were called in utilizing the Missouri One Call system. The utility mapping was completed using GPS technology and Robotic Total Stations. Field crews worked through the overnight hours to minimize traffic delays to the public, obstructions to the scanner, and to keep them out of harm's way.

MoDOT originally expected to have this project scanned with a LiDAR equipped airplane. The project limits included multiple lanes of high-density traffic through the main commercial street in Lebanon. Utilities such as water, wastewater, telephone and signal conduit were all underground. Power and cable were suspended above ground. Aerial LiDAR required ground control and ground calibration, but would only take one flight pass to cover the entire project limits. The draft fee estimate was $144,000.00 using aerial LiDAR, which was above the $100,000.00 limit set by MoDOT for on-call projects. Bartlett & West was able to substitute aerial with terrestrial LiDAR, bringing the fee down to $70,000.

This project exemplifies how the use of smart technology can save clients both time and money, while keeping survey teams safe and capturing the most data points for an accurate scan.

Another example of MoDOT utilizing LiDAR services is a statewide aerial LiDAR program that was completed in 120 days between March and July of 2014. In this case, Bartlett & West partnered with Surveying and Mapping (SAM) of Austin, TX, to provide aerial LiDAR services for eight Missouri Department of Transportation (MoDOT) mapping projects. The projects ranged from widening and shouldering projects to relocations, and from two-way rural projects to four-lane urban freeways. Two of the projects were in the St. Louis area, two in southeast Missouri, two in central Missouri and two in the Kansas City area.

SAM provided the aerial scan using a helicopter that was trucked rather than flown in to minimize mobilization costs. All eight projects were flown and scanned during four days in the same week. Bartlett & West's survey manager provided quality assurance controls to SAM's office in Austin, which were used during calibration of the aerial data. SAM submitted the calibrated data on each project to Bartlett & West's processing team in Topeka, KS.

As data sets were collected, the Bartlett & West processing team members simultaneously worked the different projects to extract and classify topographic features and create a basemap complete with contours. These features were extracted from the LiDAR data using Microstation and TopoDOT software. Field notes, text files and the survey report were added to the geopak files created for MoDOT designers. Before copying, each data set was set up by Bartlett & West's experienced technicians and designers and verified the data was ready for a MoDOT designer. Each project was uploaded onto an external hard drive and hand delivered to MoDOT in the order of priority.

"Benefits of using LiDAR rather than traditional survey for these MoDOT projects include our ability to minimize human exposure to fast moving traffic, the thoroughness of the point data we are able to collect, and the accuracy of that data," said Bailey.

He also points out that LiDAR can reduce costs on certain complex project and be used to provide design-ready digital data deliverables efficiently. "LiDAR isn't the solution for every survey project," Bailey said. "Yet, when it fits the technology really provides innovative solutions."

Original article can be viewed here.